Studded with fresh apples and lot of warm spice flavor, this easy apple cinnamon rolls recipe will be an instant favorite!

Try my fresh Apple Coffee Cake next! Check out my other dessert like breakfast recipes here. 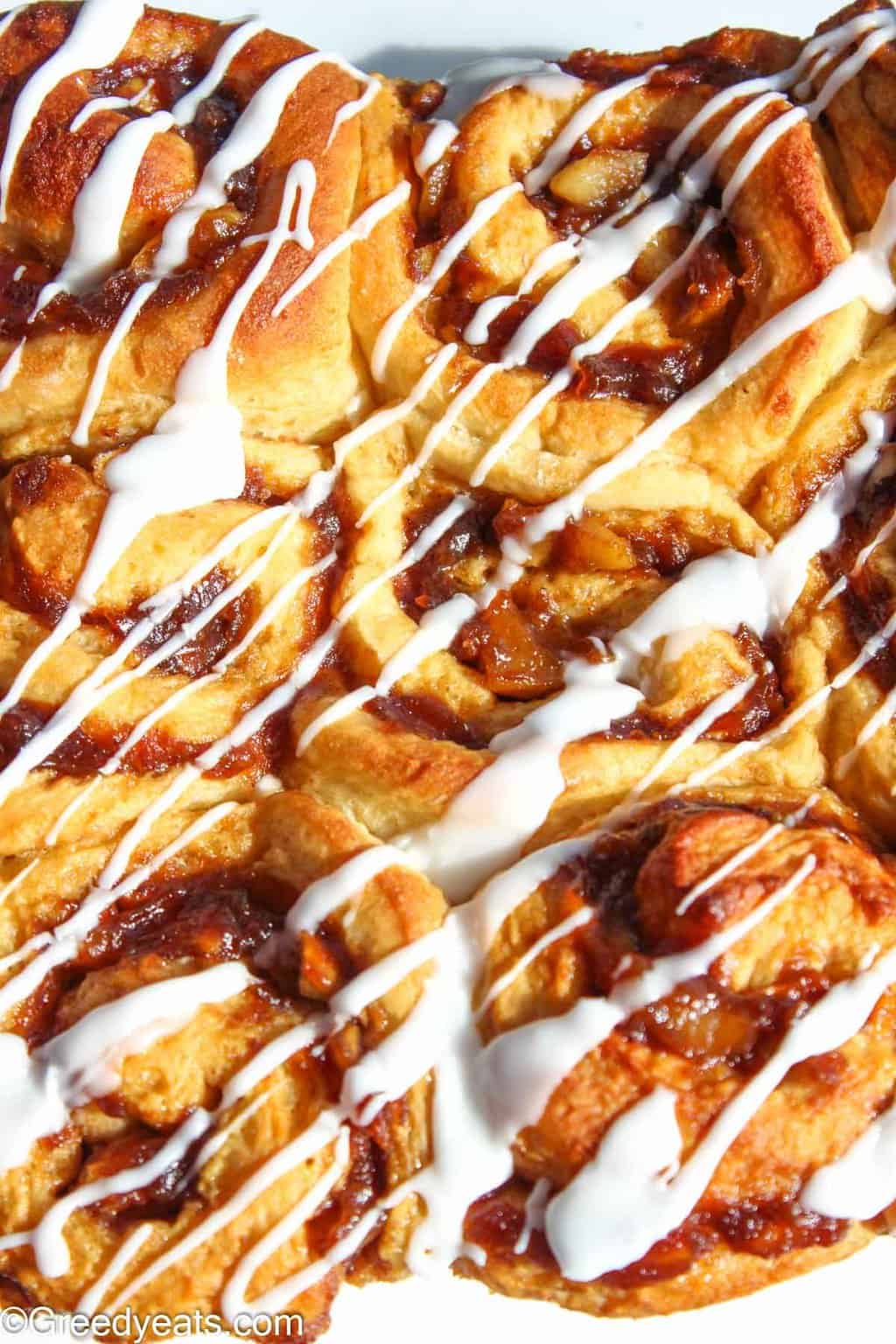 When cinnamon roll meets your favorite fall flavor. Who wouldn’t like to taste cinnamon roll and apple pie both in a single bite?

Delicious, warm, gooey centers swirled in soft, golden brown and buttery bread. And that drizzle of sweet vanilla glaze takes these rolls over the top.

We require 7 ingredients for making the dough. 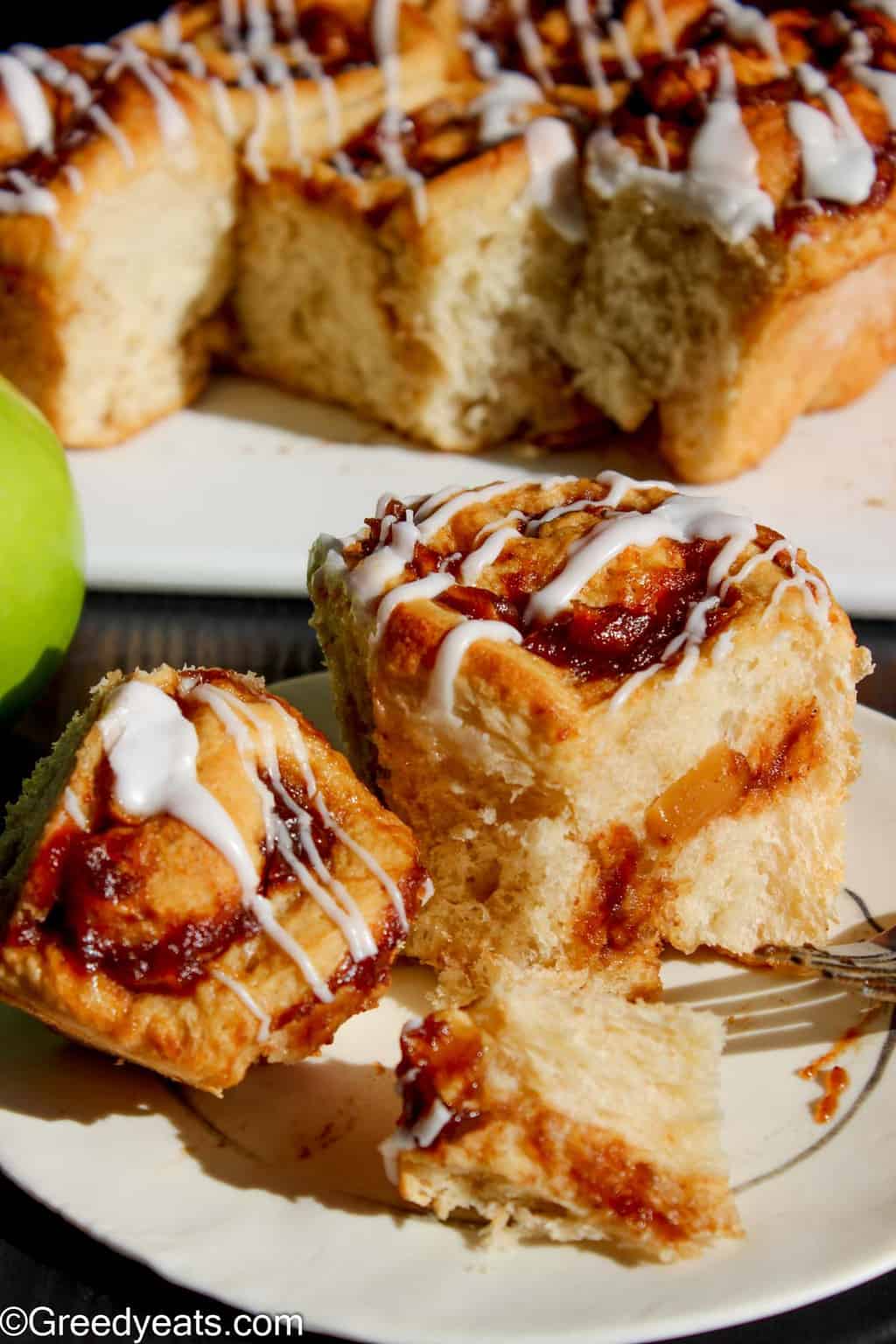 For the filling we will need-Apple butter, brown sugar, cinnamon and some fresh apple chunks

And for vanilla glaze: Confectioners’ sugar, some vanilla and milk.

There are 6 parts to today’s recipe. An these homemade cinnamon rolls are super easy to make. 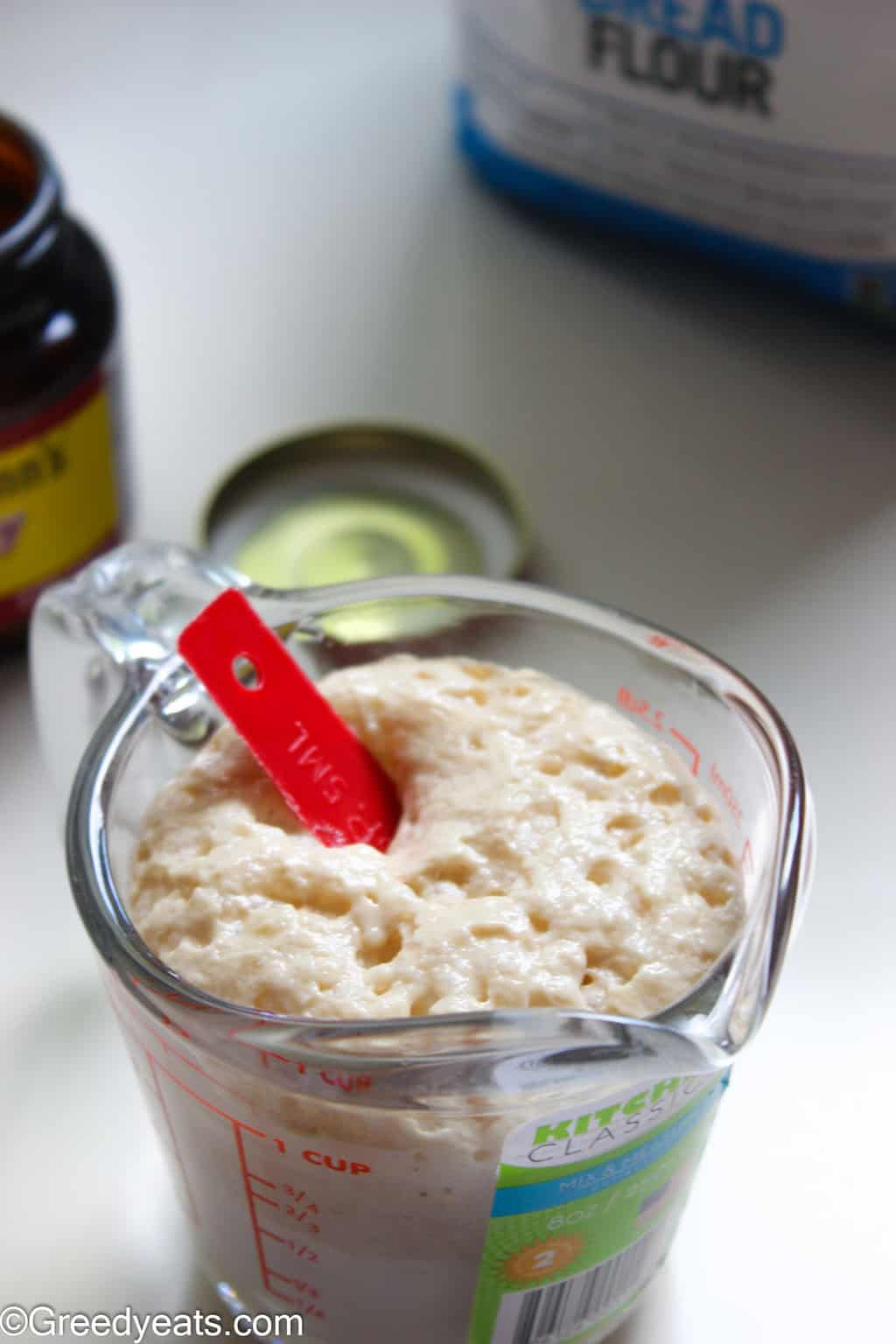 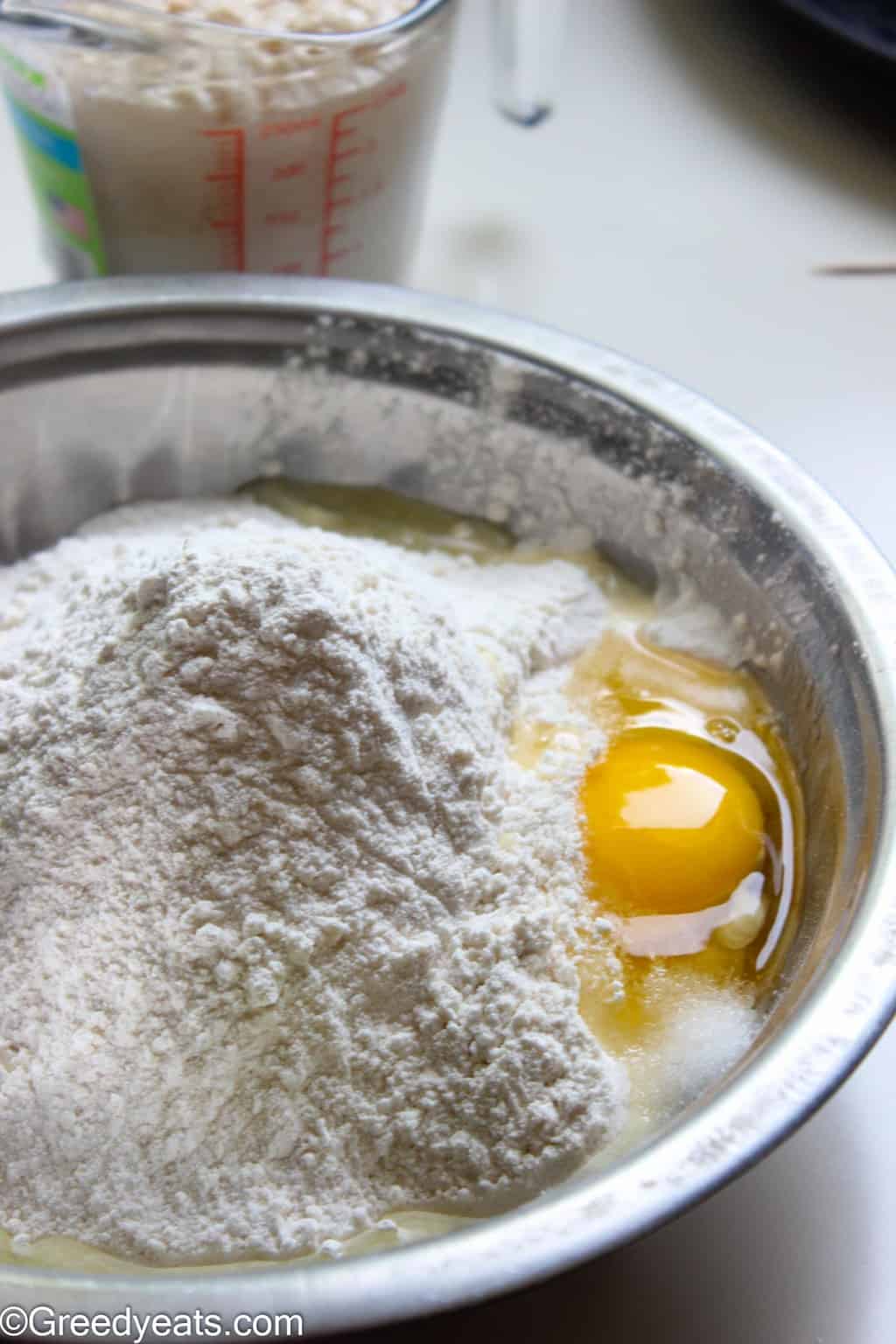 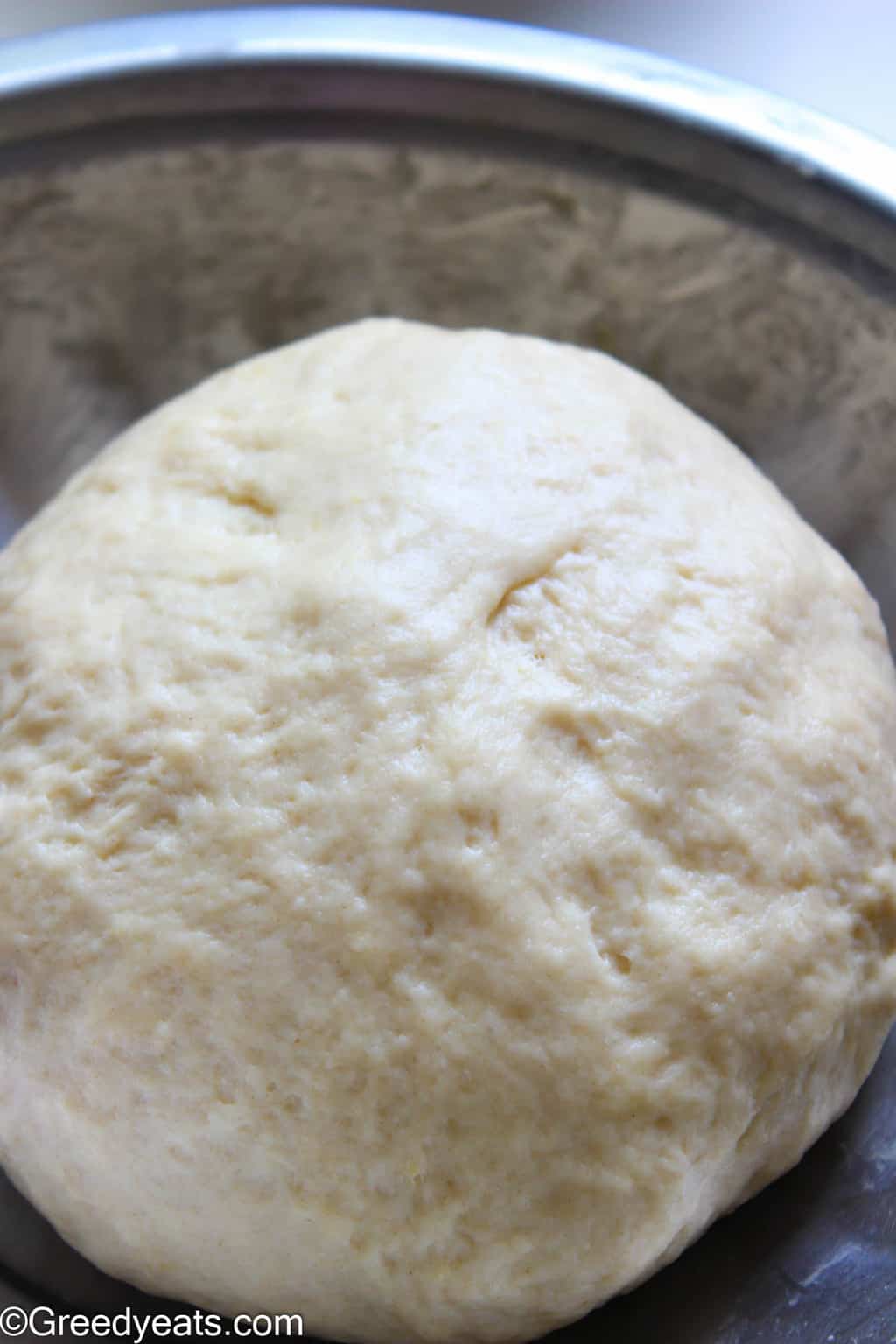 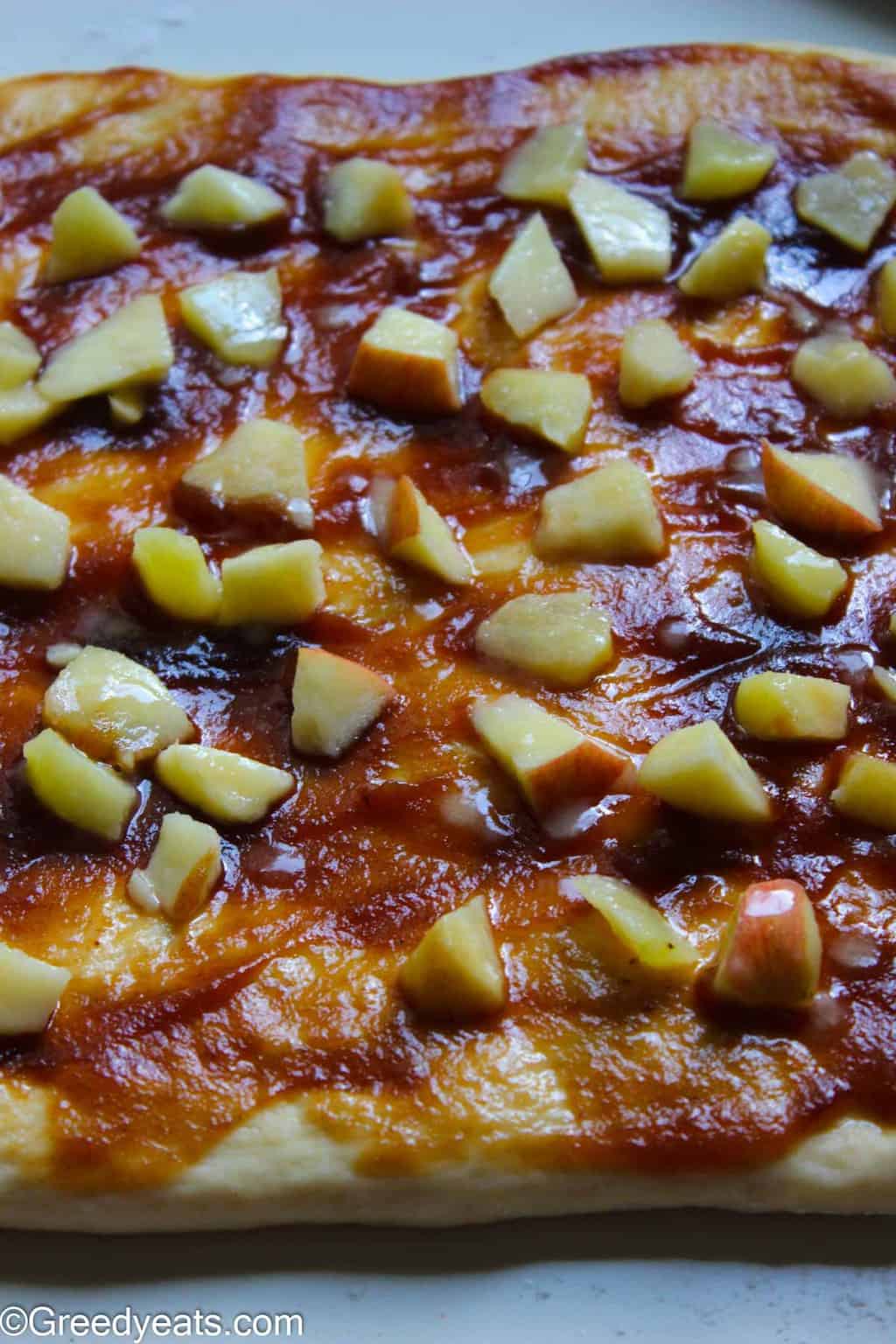 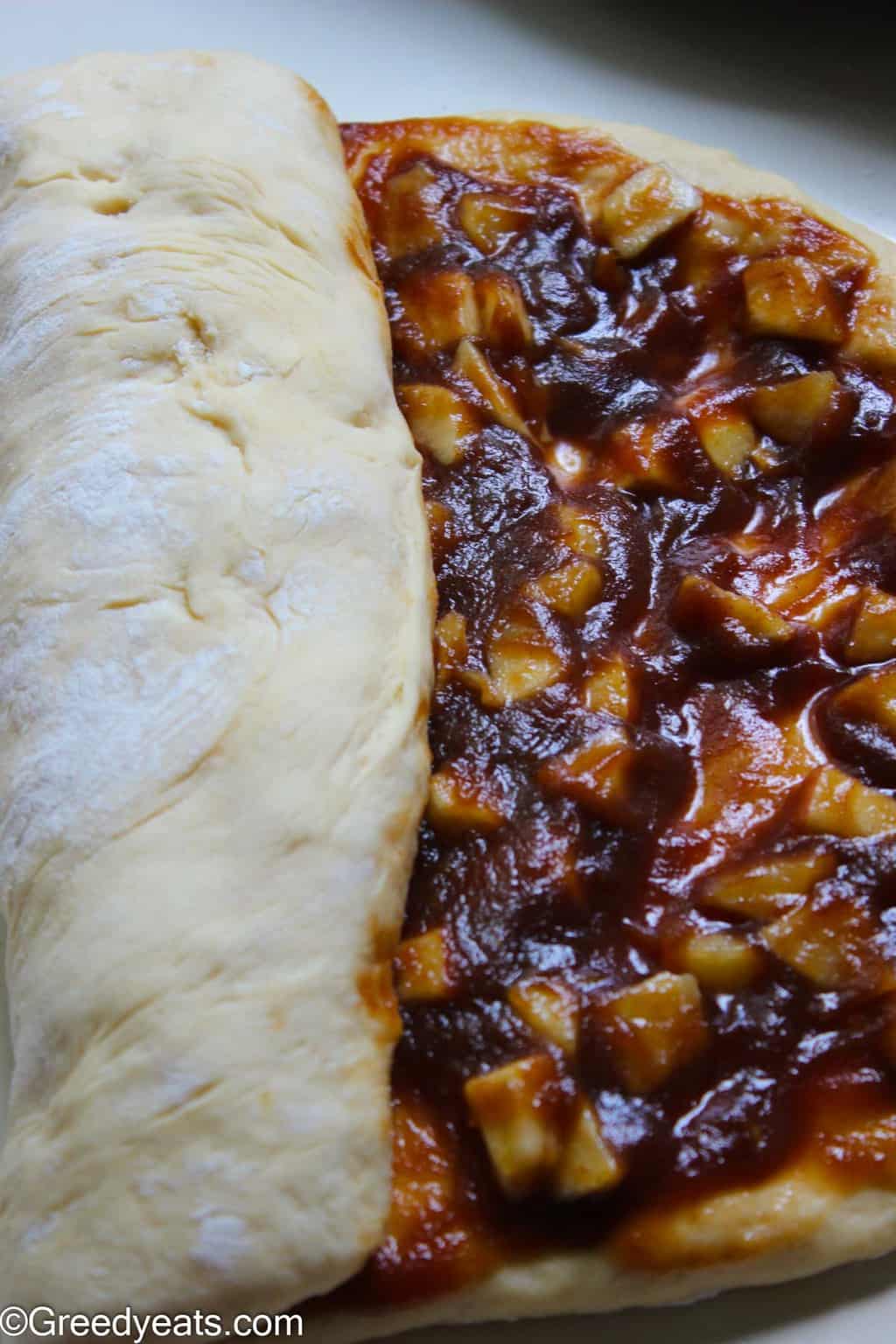 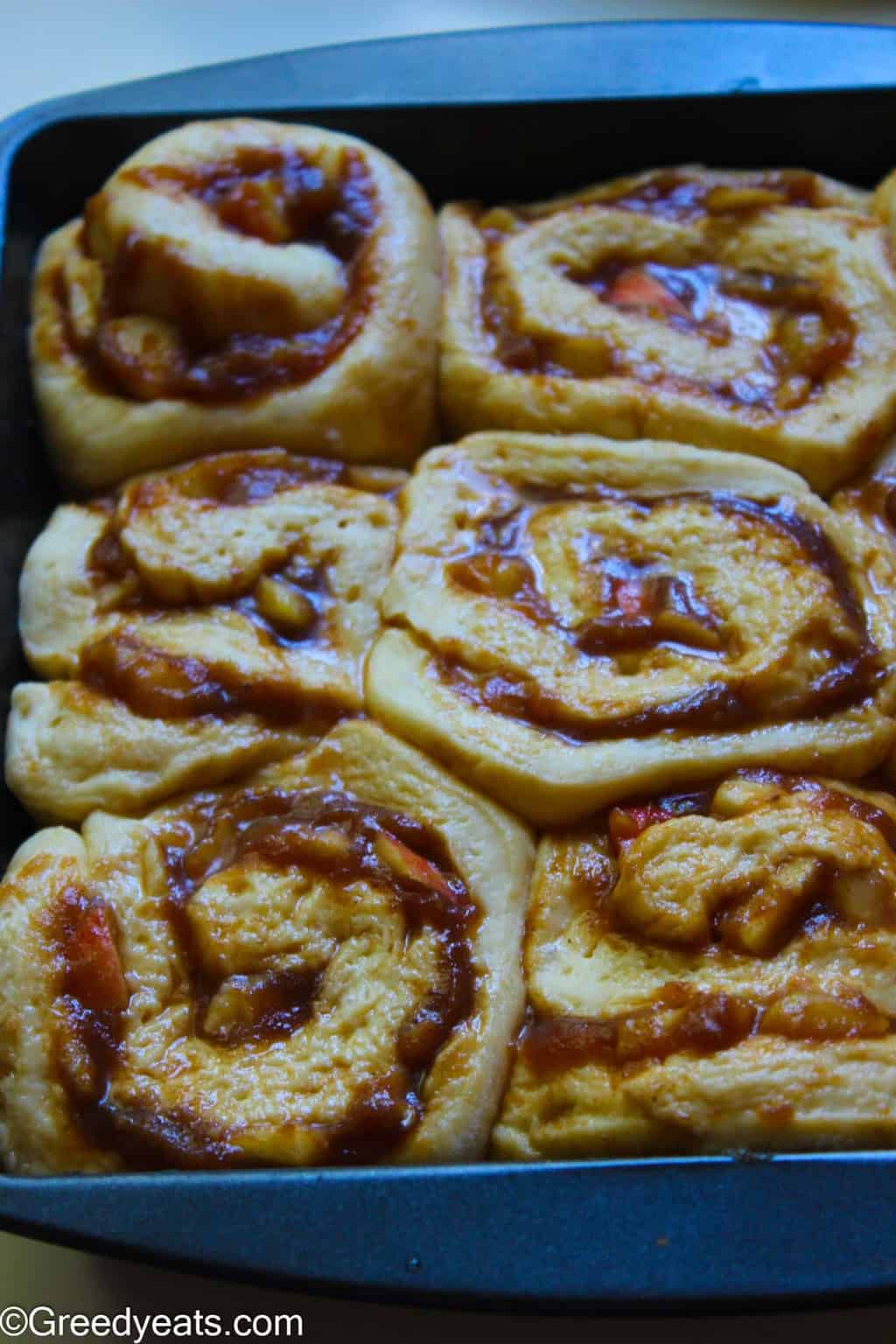 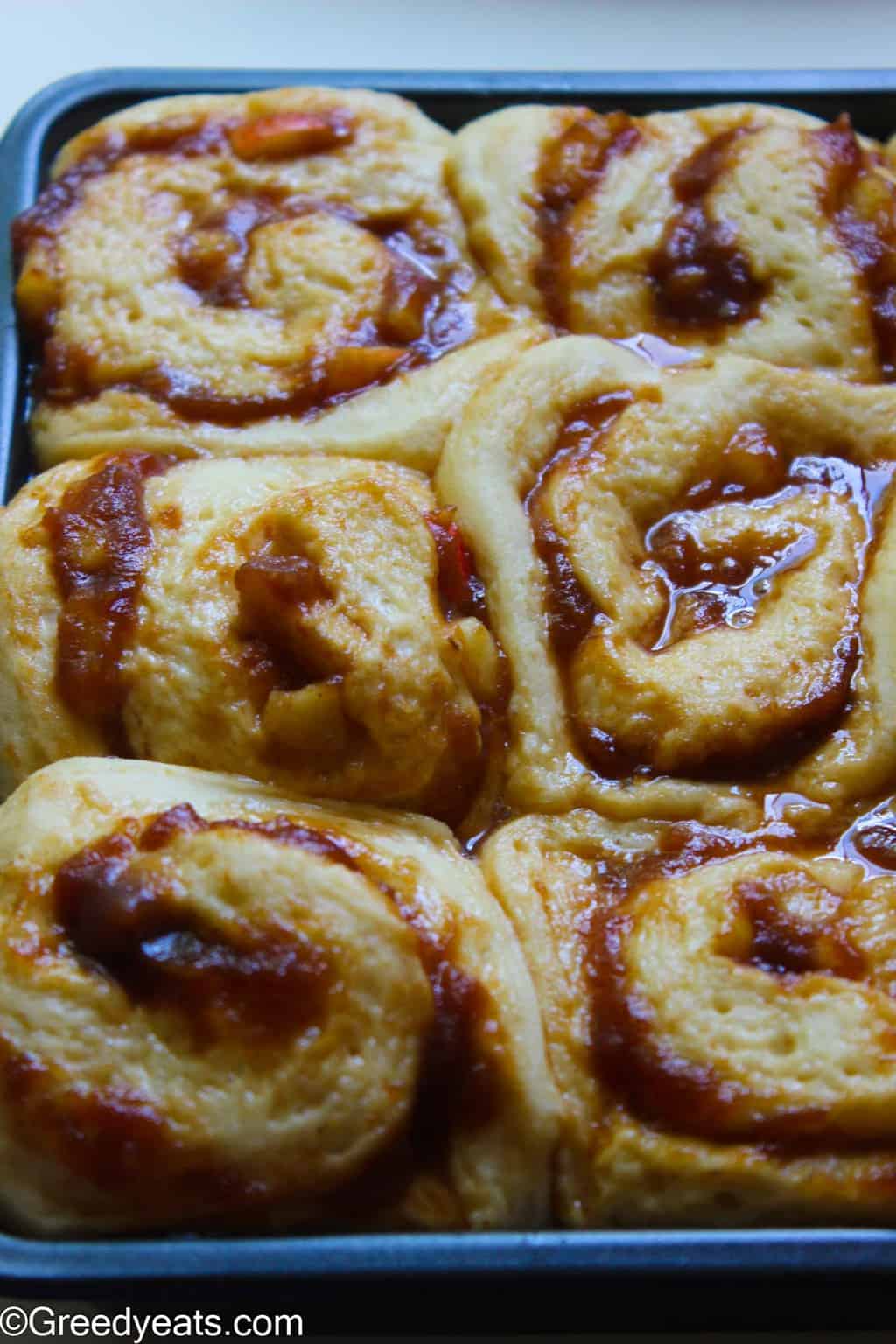 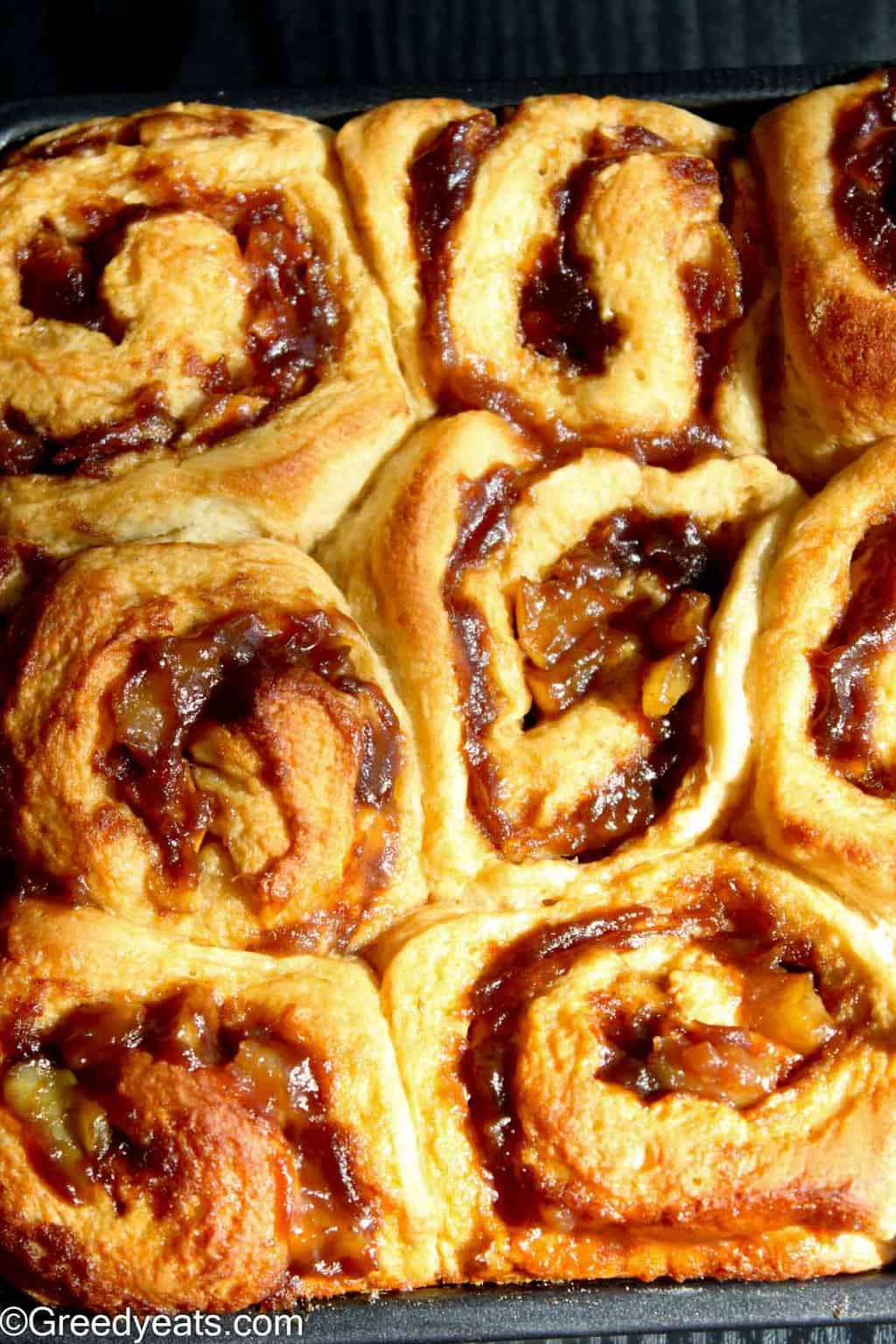 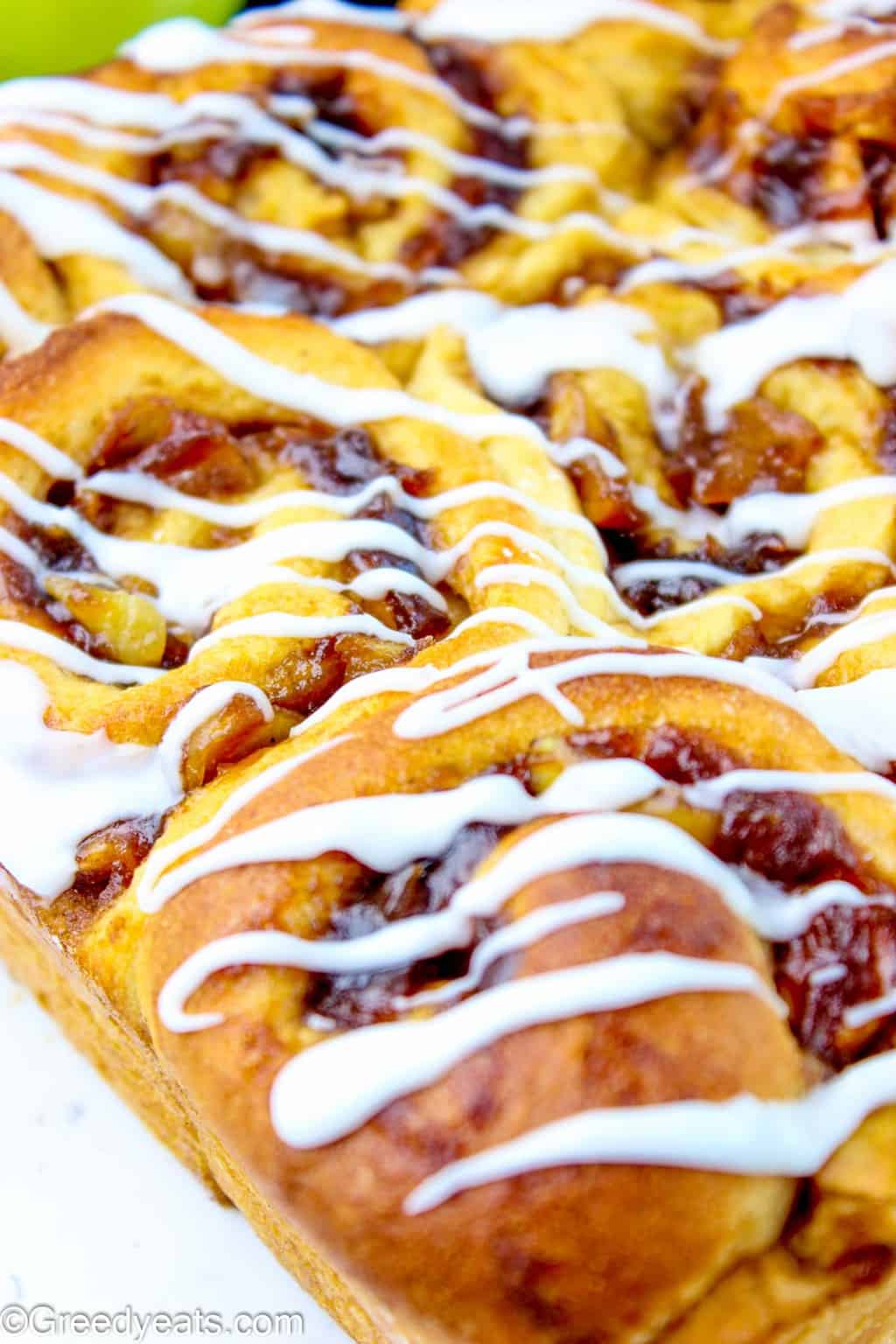 Should cinnamon rolls touch when baking?

Cinnamon rolls should not touch before rising and before baking. So don’t jam pack them in your pan. The will expand as they rise and bake. So leave that space!

How do you know when cinnamon rolls are done?

They will be golden brown in color. Also check the center most roll with a fork for doneness. It should not appear raw.

How long can you keep cinnamon roll dough in the fridge?

The dough can stay in the fridge for about 24 hours. You can let it rise there. This makes the rolls very flavorful! 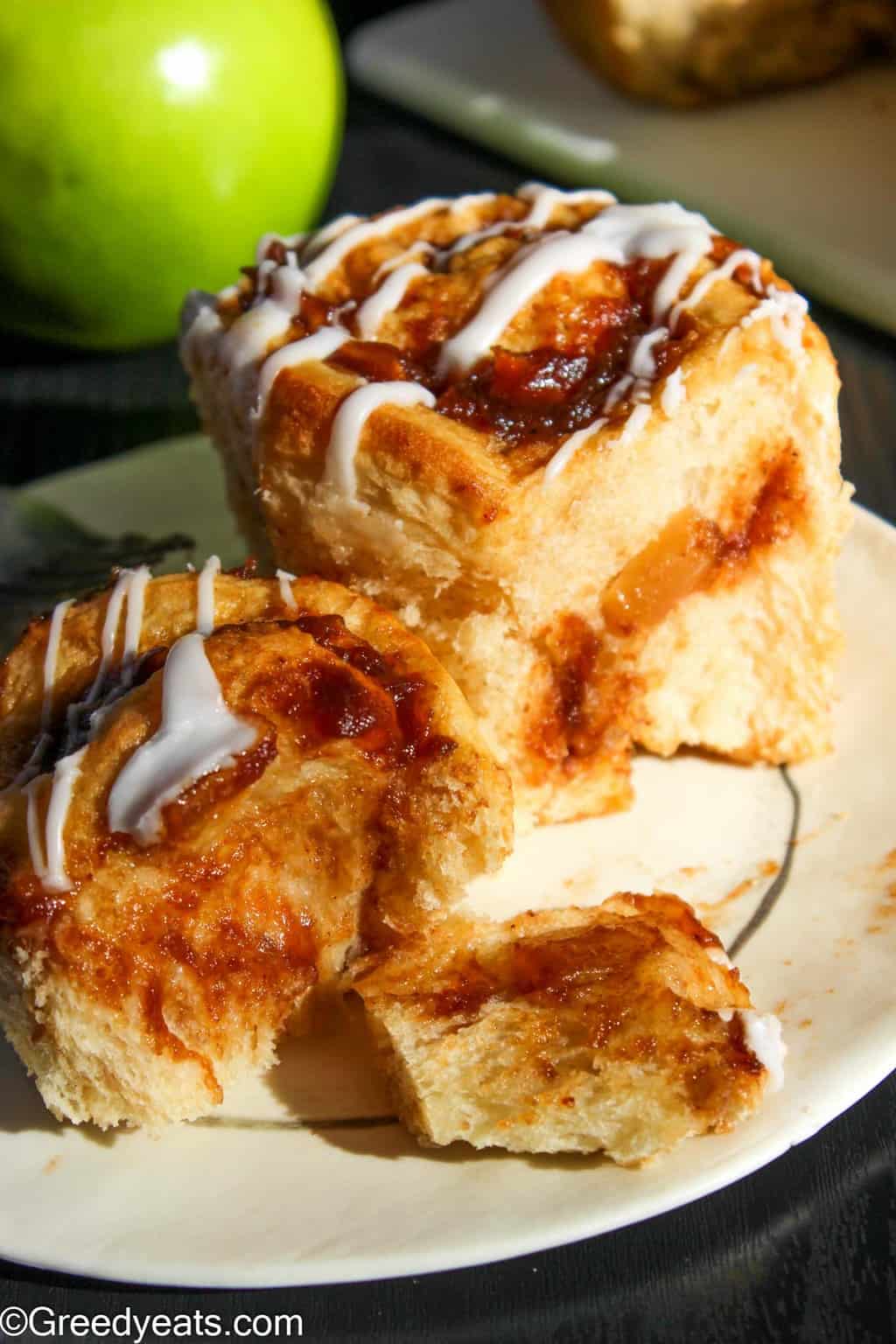 Can you bake cinnamon rolls in a glass pan?

Yes you can. But as the glass doesn’t heat up as quickly as metal, you will need to increase the baking temp by approx. 25 deg F for your rolls to bake well.

Why are my cinnamon rolls tough?

You might have accidentally added too much flour. This may result in dry and tough rolls. The dough may appear a bit sticky at first. Don’t be tempted to add way too much flour at once!

Why are my cinnamon rolls tough?

Sounds like your dough was over worked or under proved. 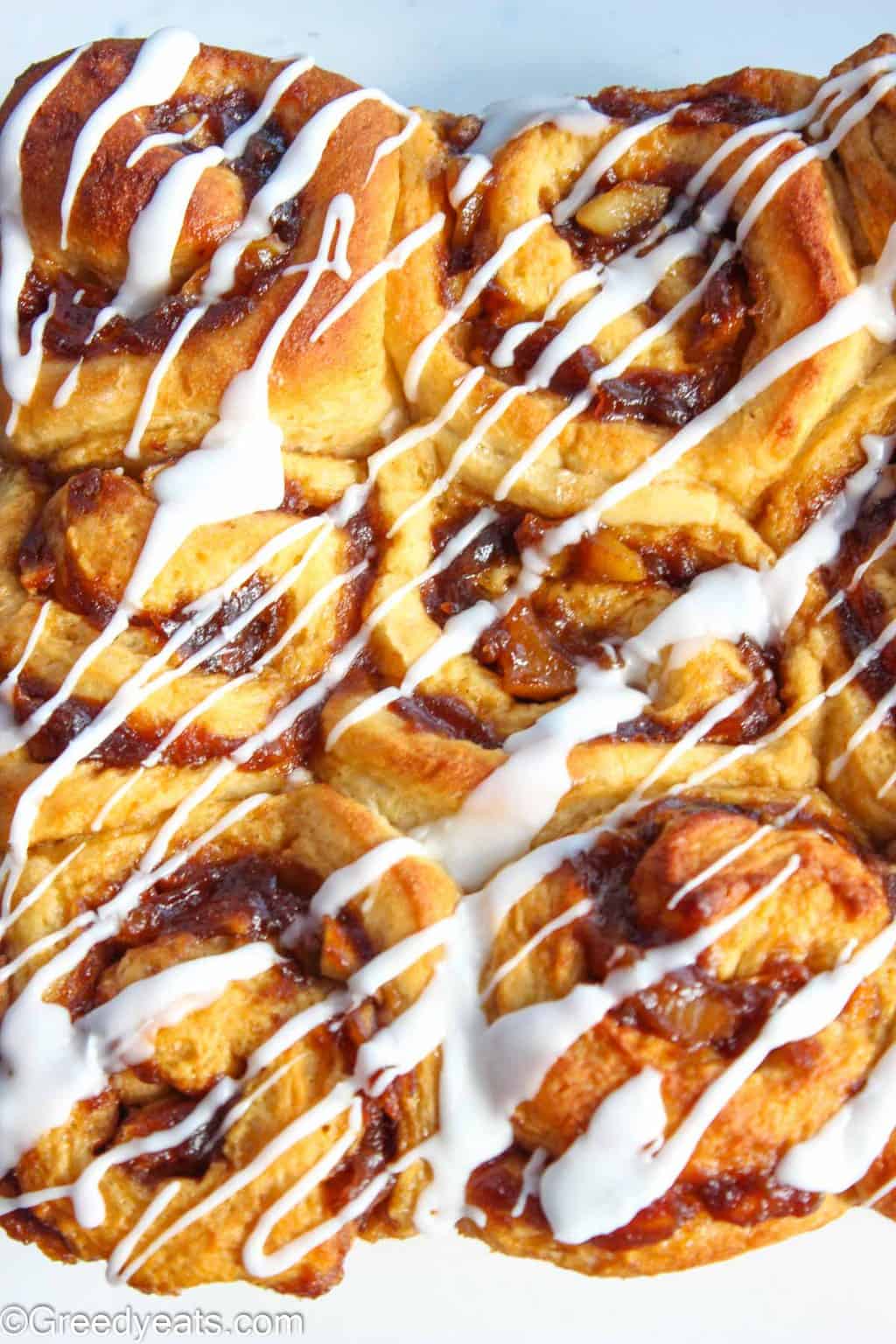 Follow the basic bread baking rules and you will bake perfectly soft, buttery, and puffy Cinnamon rolls. Every single time!

If you liked these rolls you will love my easy banana caramel cupcakes.

Have you tried my pumpkin flavored overnight oats yet?

You’ll be thrilled to wake up to these fall flavored oatmeal cookies!

And all my very favorite fall favorite desserts recipes!

How do you store cinnamon rolls? How do you reheat frozen cinnamon rolls? Preparing ahead instructions: You can leave your dough for first rise in the refrigerator overnight or up to 24 hours. Take the dough out and continue with step 6. A note about yeast: If you use active dry yeast, rising time will be a little longer.

More from my oven!

©GREEDY EATS. The content and images on greedyeats are copyright protected. Please do not use/republish my images, content or recipes without my prior permission. When sharing, you can always link back to this post for recipe.

I'm Neha, baker, recipe developer, photographer and writer at Greedyeats.com My aim is to create kitchen tested and quality recipes, accompanied by helpful process clicks and lots of tips & tricks along the way. I truly hope my recipes gives you confidence to bake and cook from scratch! More about Neha… 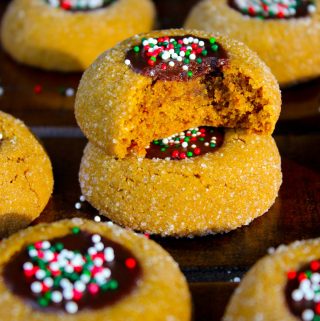 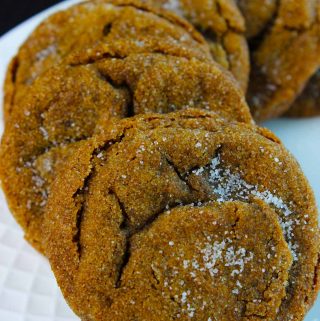 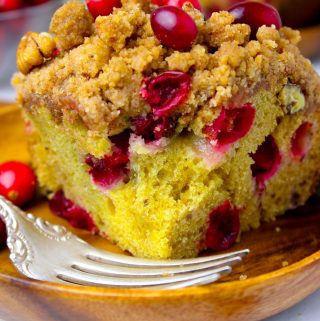 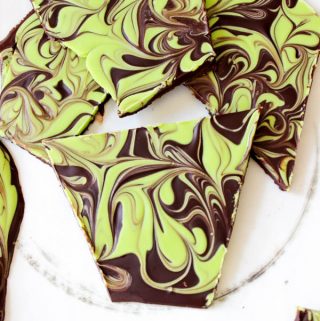 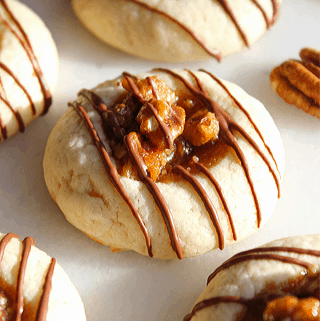 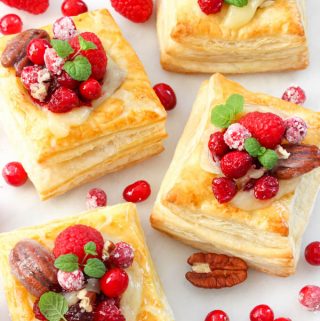 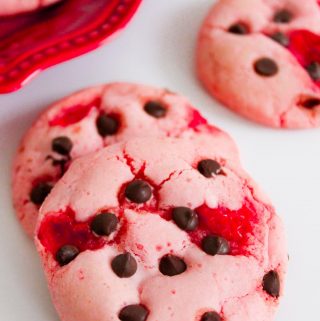